L.A. Security Guard Charged With Murder After Killing Man For Not Wearing Mask

A security guard at a Gardena market was charged today with murder after a fight ensued after someone was not wearing a mask, the Los Angeles County District Attorney’s Office announced.

Umeir Corniche Hawkins (dob 4/2/82) of Gardena faces one count each of murder and possession of a handgun by a felon.

His wife, Sabrina Carter (dob 9/25/69), also is charged with one count of possession of a handgun by a felon.

The felony complaint in case YA102217 said both defendants were convicted in 2013 for assault by means of force likely to produce great bodily injury.

Hawkins and Carter pleaded not guilty to the charges today and are scheduled to return on July 10 in Department 8 of the Los Angeles County Superior Court, Torrance Branch.

Jerry Lewis, 50, reportedly entered the market without a mask and got into an argument with Hawkins on July 5, prosecutors said. Lewis then left the store, returned and allegedly fought with the defendant who then fatally shot the victim as he walked away, prosecutors added.

Bail for Hawkins is set at $1 million and $35,000 for Carter. Hawkins faces a possible maximum sentence of 50 years to life in state prison and Carter faces three years in prison.

The case remains under investigation by the Gardena Police Department. 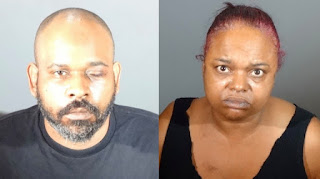 The victim, Jerry Lewis, was also known under his rapper alias 'Madd Head.' His daughter Jerica Hill said "it shouldn't happen this way. My dad is not that type of person. He has a good heart."

Here Lewis performs one of his songs:

Please see the following video and note it was posted over a month ago. It was actually not bad crisis actors playing dead in Ukraine, but rather was regarding a climate policy protest in Vienna and was posted 2/4/22 on YouTube here https://youtu.be/2o3Rph8DcUY As well as on Twitter 2/8 here https://mobile.twitter.com/SupaStrawberry/status/1491106998360117248 This is regarding the currently viral vid 'UKRAINE BODY BAG PROPAGANDA FAILS AS THE ACTORS JUST WON'T STAY... CHILL' https://www.bitchute.com/video/fVxGiHParDAC/ (Was also posted by Paul Craig Roberts, link below) An astute commenter on bitchute notes: "FALSE: This was never aired on Ukrainian TV, but made by a channel creator who remove the actual Headline in the original video; then uploaded it. I wish they would just leave the media do the scams.' https://www.youtube.com/watch?v=2o3Rph8DcUY Wien: Demo gegen Klimapolitik = MEANS Vienna: Demo against climate policy" [/End comment.]
Read more