Rep. Nino Vitale - Rep. Vitale Introduces Bill to Ban All Mask Requirements Unless a 2/3rds vote is reached, as the Ohio Constitution Requires.

Late Thursday afternoon, Rep. Vitale released a co-sponsor request for a bill which would not allow any Ohio State official, elected or unelected, to require facial covering of any kind, without 2/3rds vote from both the Ohio House and Senate. 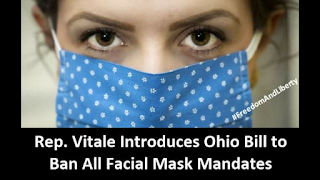 Vitale stated, “This bill will simply extend the same protections of freedom and liberty House Members voted on for themselves, to the 11.7 million people of Ohio. Citizens are still free to wear a face covering if they choose, but it cannot be mandated without the 2/3rds vote.”

When pressed about the concern that wearing a mask may help stop the spread, Vitale stated, “They told us not to wear masks for almost 6 weeks, then did a 180. Many doctors disagree and say a healthy person wearing a mask could actually be harmful. Some, like Doctor Russell Blaylock’s review of 17 scientific studies stated face coverings can actually be harmful and possibly increase concentrations of a virus in the nose, which travels through the olfactory nerves and into the brain.”

Vitale went on to further cite the study which stated, about 30% of workers developed headaches with the use of masks.

When asked about the requirement from the Ohio Constitution, Rep. Vitale stated, “Article 2 section 1d states, …emergency laws necessary for the immediate preservation of the public peace, health or safety, shall go into immediate effect. Such emergency laws upon a yea and nay vote must receive the vote of two-thirds of all the members elected to each branch of the general assembly. I’m simply asking for the Ohio House and Senate to follow what we all swore to uphold, the highest law of the land.”

Rep. Vitale concluded the co-sponsor request by stating to the Republican members of the House, “I am sure it will be an easy decision for you to co-sponsor this short bill and extend the same courtesies you gave to yourself, to all fellow Ohioans and allow representative government and the Ohio Constitution to be the rule of law in Ohio.”

“I personally cannot stand any elitist political attitude that states the people should be required to do something while the elite political class is not required to follow the same laws. I reject that,” said Vitale. Ohio House members have until Friday, May 22, 2020 to add their name in support of the bill.

Please see the following video and note it was posted over a month ago. It was actually not bad crisis actors playing dead in Ukraine, but rather was regarding a climate policy protest in Vienna and was posted 2/4/22 on YouTube here https://youtu.be/2o3Rph8DcUY As well as on Twitter 2/8 here https://mobile.twitter.com/SupaStrawberry/status/1491106998360117248 This is regarding the currently viral vid 'UKRAINE BODY BAG PROPAGANDA FAILS AS THE ACTORS JUST WON'T STAY... CHILL' https://www.bitchute.com/video/fVxGiHParDAC/ (Was also posted by Paul Craig Roberts, link below) An astute commenter on bitchute notes: "FALSE: This was never aired on Ukrainian TV, but made by a channel creator who remove the actual Headline in the original video; then uploaded it. I wish they would just leave the media do the scams.' https://www.youtube.com/watch?v=2o3Rph8DcUY Wien: Demo gegen Klimapolitik = MEANS Vienna: Demo against climate policy" [/End comment.]
Read more